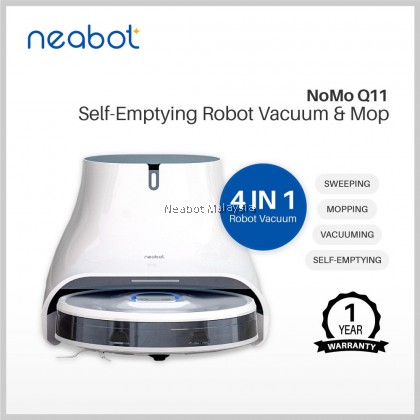 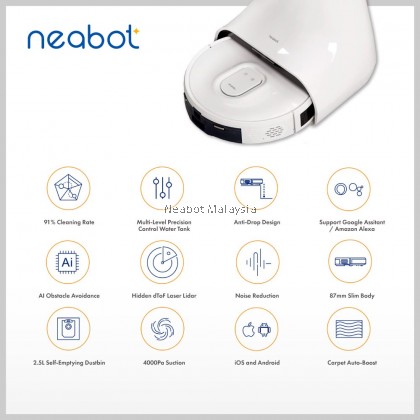 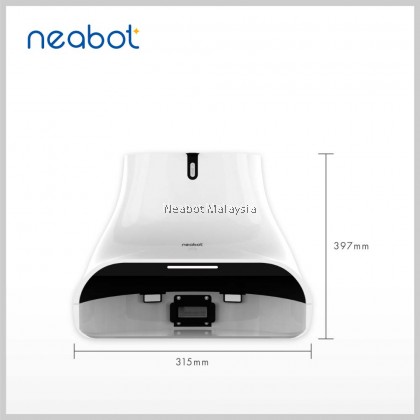 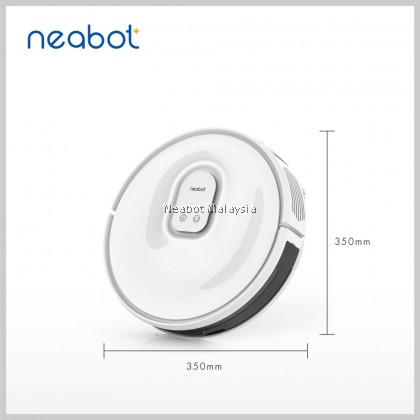 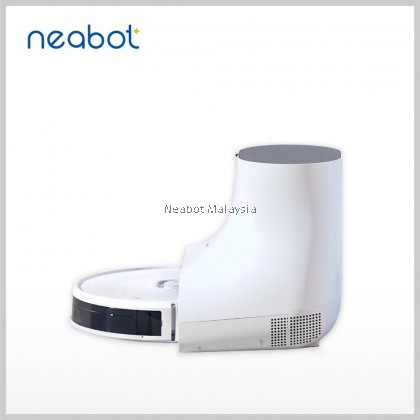 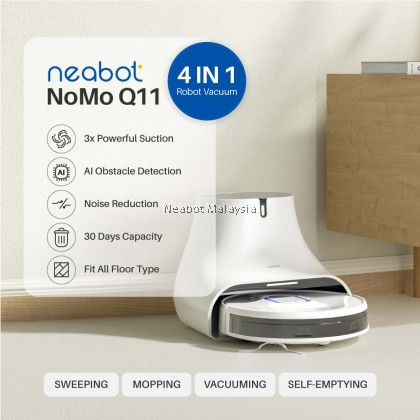 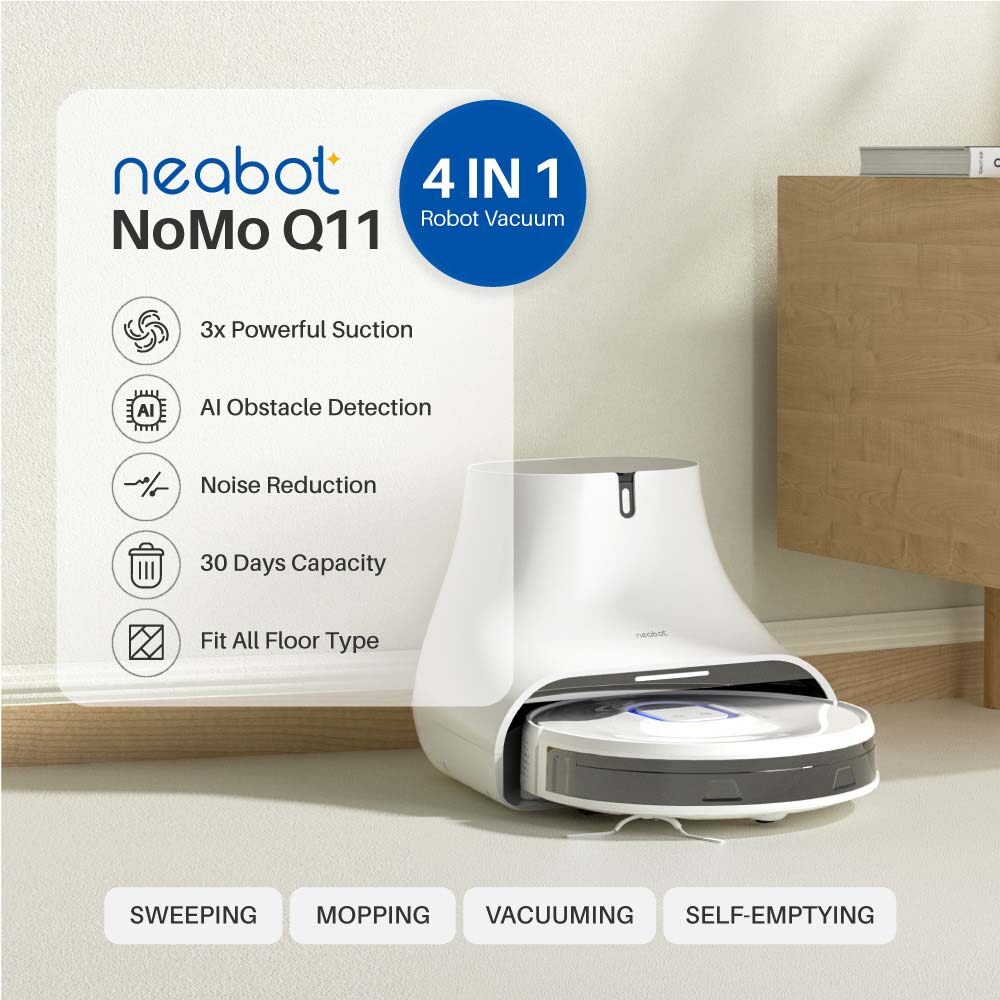 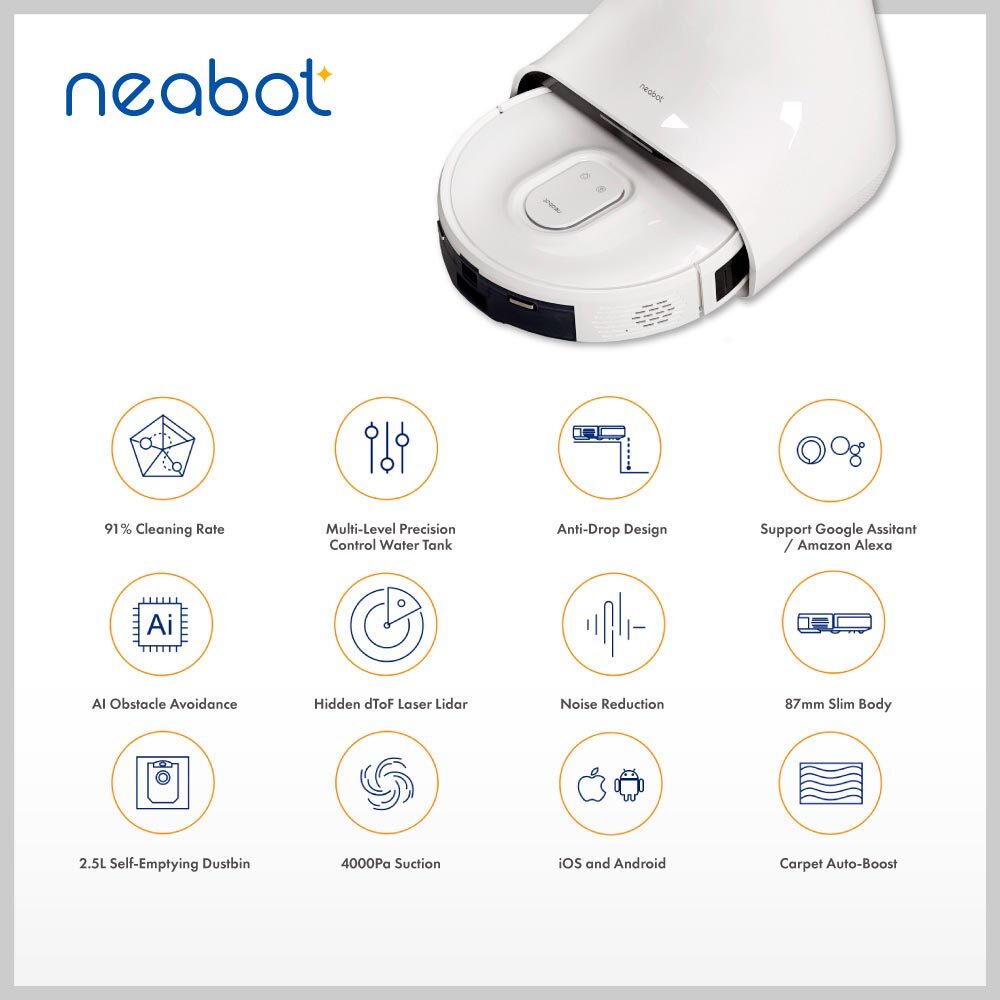 AI Intelligent Obstacle Avoidance, Hidden dToF Laser Lidar
Based on structured light technology and 3D imaging algorithm. Easily cope with any complex environment, react faster and predict more accurately.Unlike most robot vacuums with their radar stacked on top, Neabot Q11hides the Beam LiDARs inside the body, significantlyreducing the thickness of the robot. Q11 is merely3.4” in heightand can easily roam under sofas, beds and cupboardsetc. 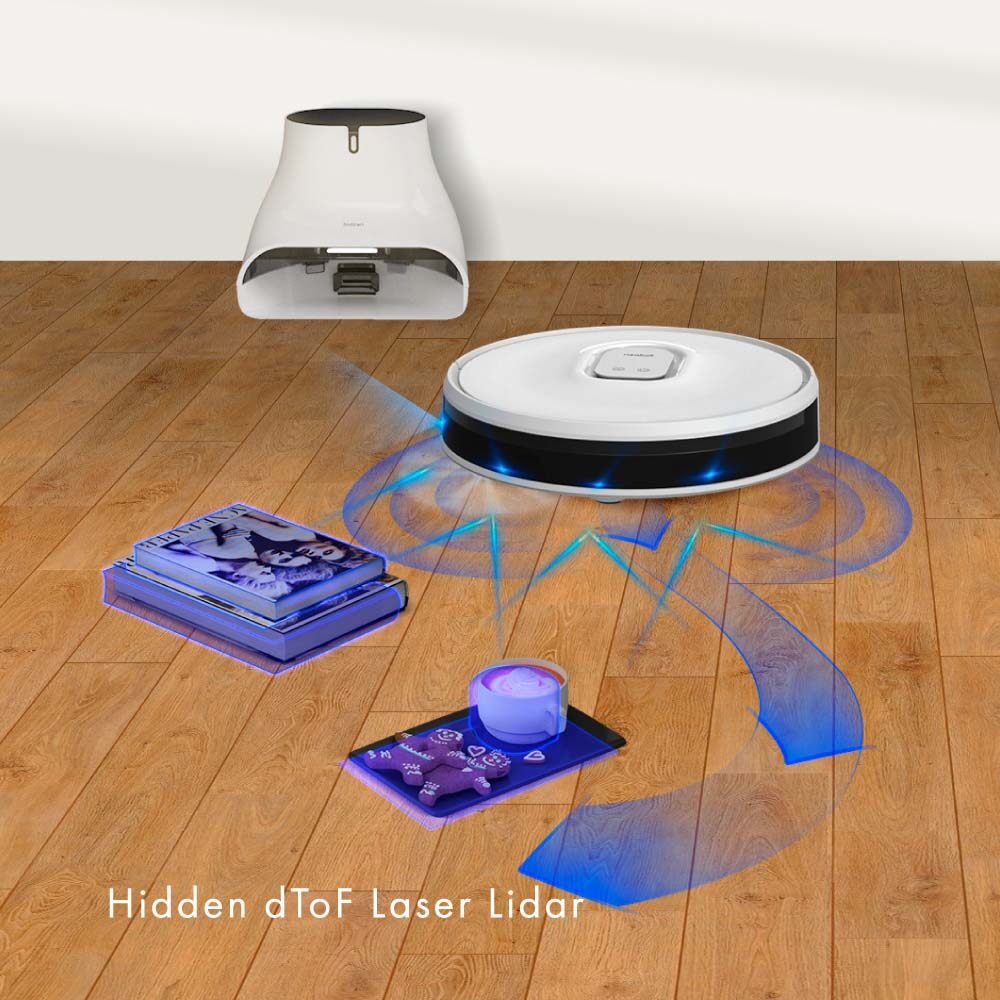 3.4 inch Slim Body
Q11 has an ultra-thin body so that the underside of the sofa is no longer a restricted for sweeping robots. 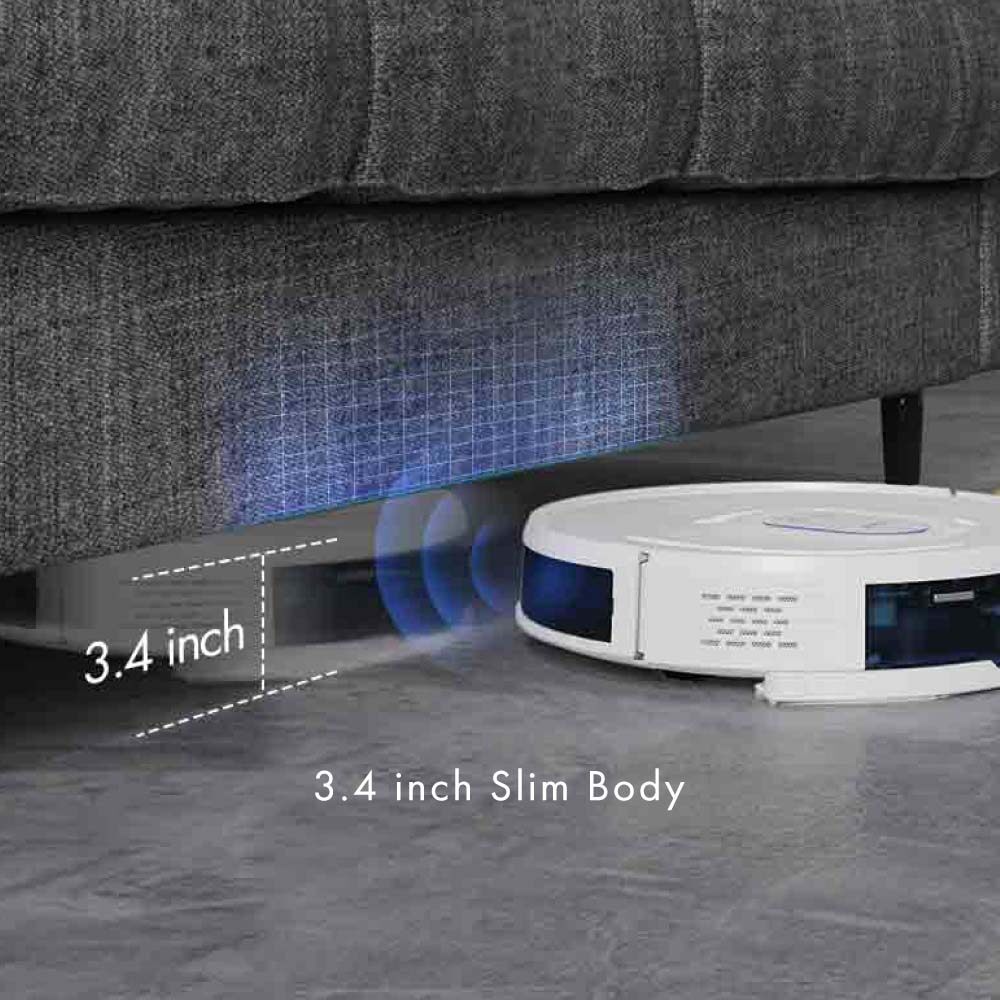 Anti-drop Design
If you ever had a robot vacuum before, it’s quite likely you’ve seen it tumbling down the stairs. That is never going to happen to Neabot Q11, thanks to those4 most sensitive anti-drop sensorsbuilt in. This is a safety measure for the robot itself, your house, but most importantly you and your family. 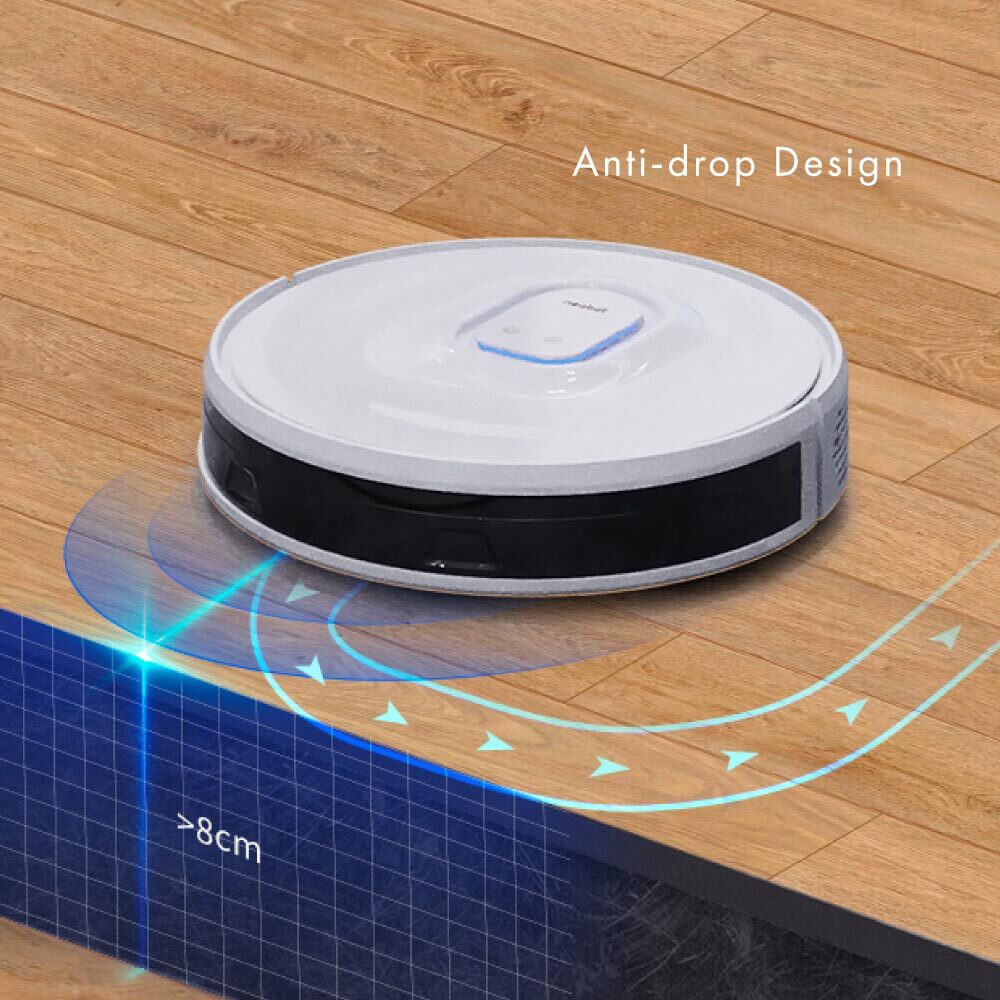 Excellent Obstacle Crossing Ability
Also, NeabotQ11 can climb on and off carpet from hard floor effortlessly. It can climb over obstacles ≤2cm. 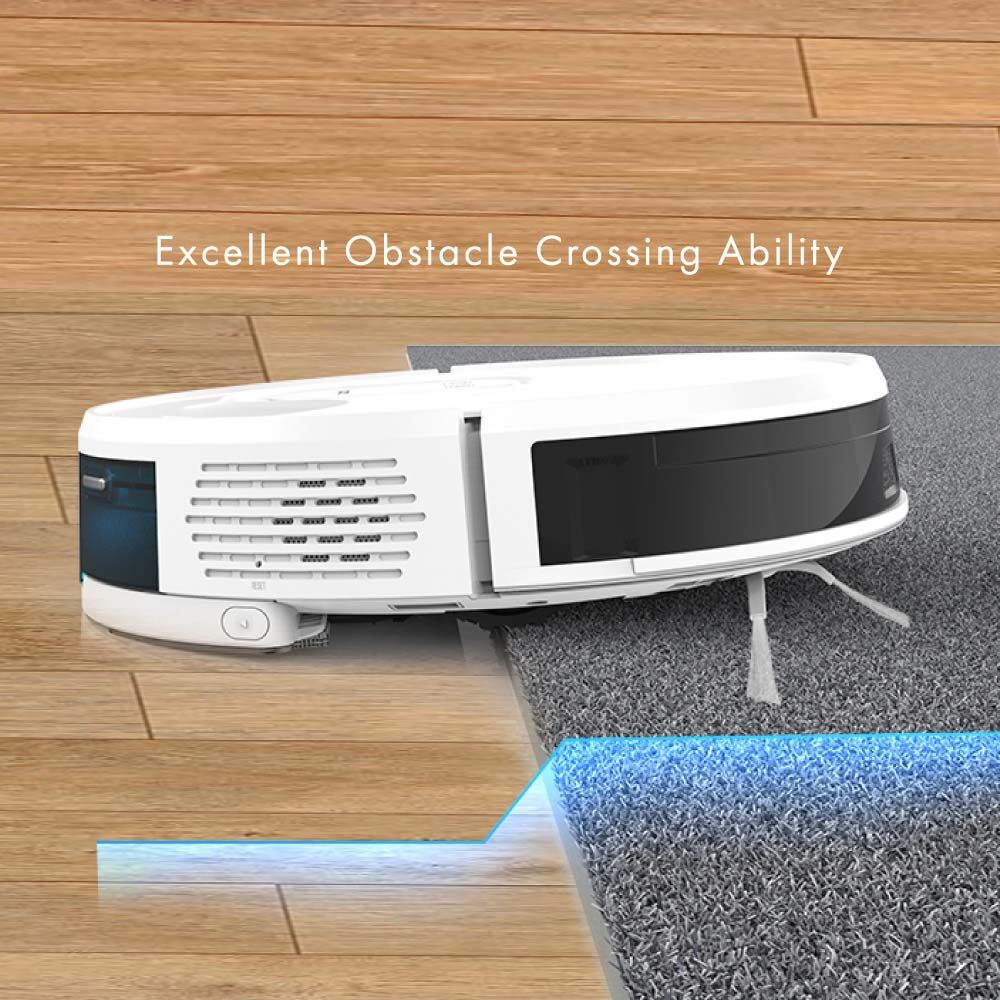 What is the Concept of 4000Pa?
No matter it’s flour, grains, beans or even marbles, the powerful Neabot Q11 can handle with ease. Wherever Neabot Q11 has scrolled by is spotless. Now you don't have to worry about your kids running around the house bare-footed. Manual vacuuming? Never again! 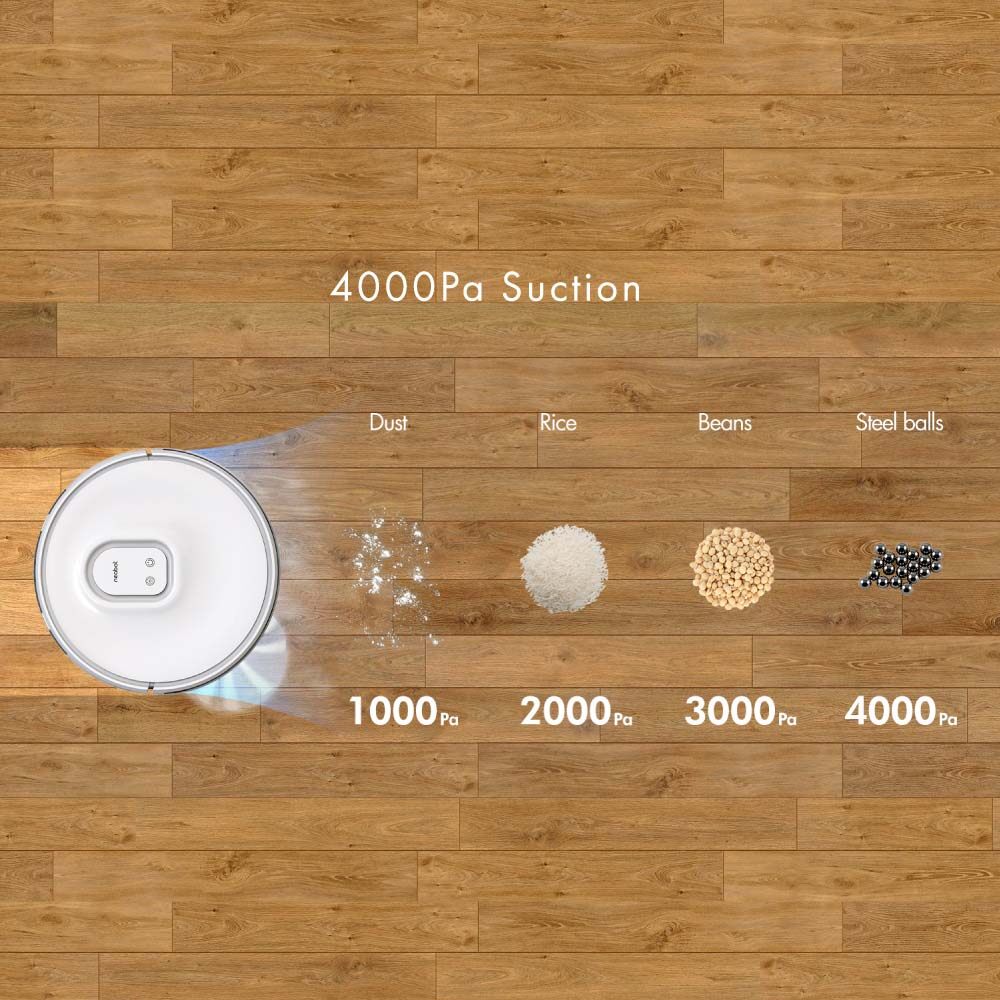 Noise Reduction
Neabot Q11 has a suction power of 4000Pa, one rarely seen in robot vacuums of comparable size. That doesn't give us reason to settle for less noise cancellation. Instead, we have many smart designs and delicate mechanisms to reduce Q11's noise level, so it'll leave you and your family undisturbed for work, study, a nap, a movie, yoga exercise and even meditation.*Noise level varies under different work conditions. Under Silent Mode, 650pa suction, Neabot Q11 is 65dB. 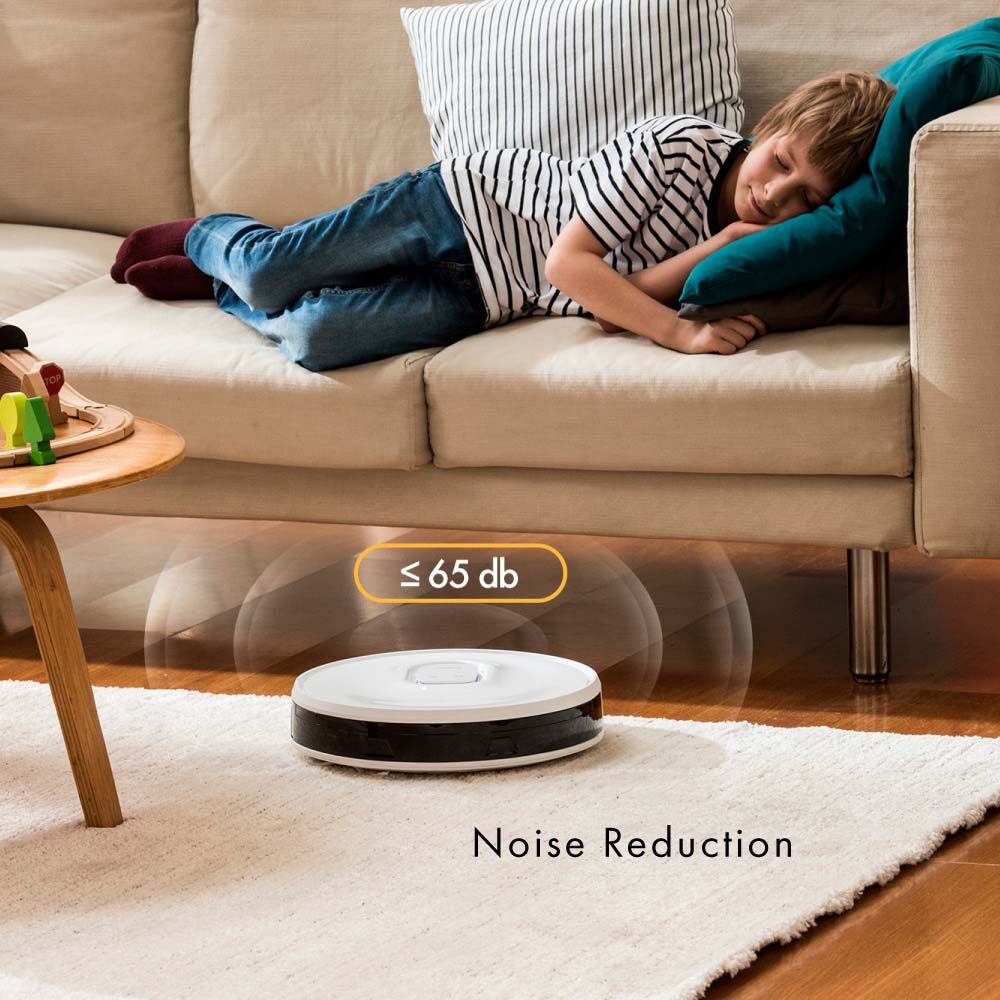 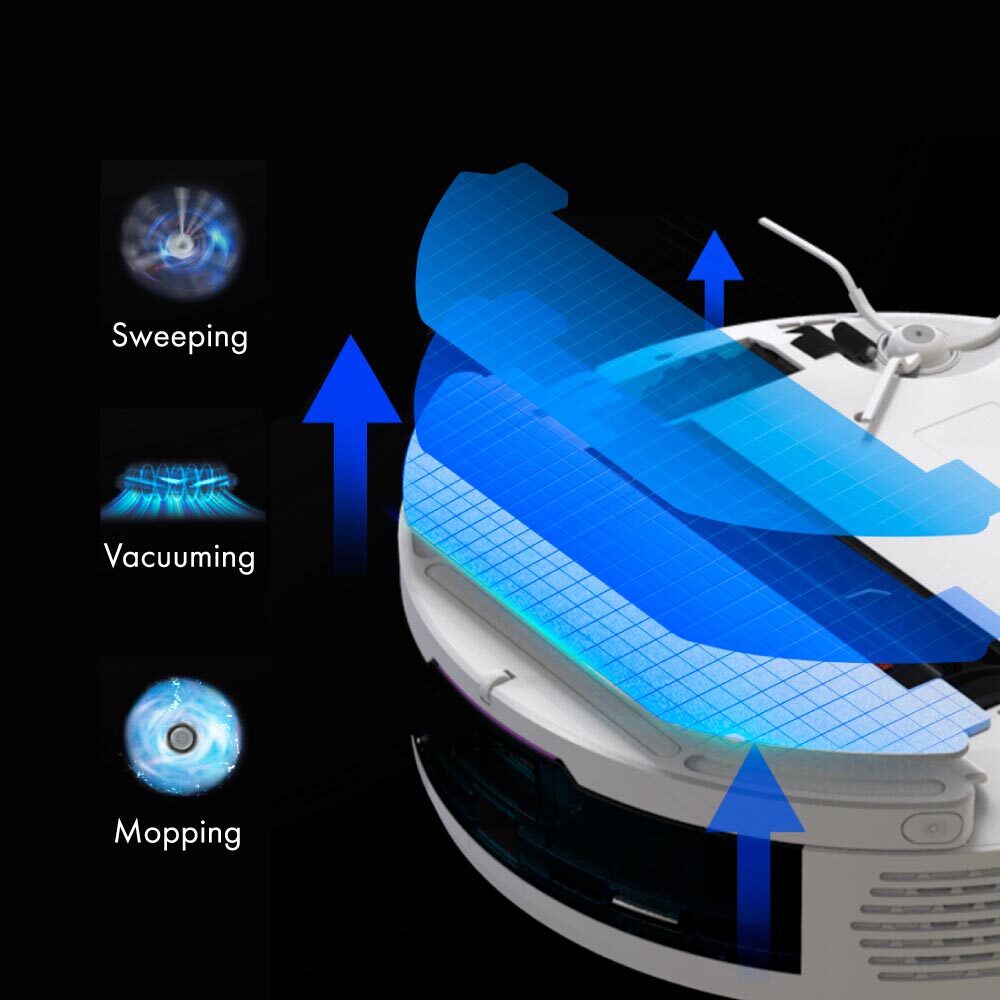 2.5L Supersize Self-emptying Dustbin and Automatic RechargeThe base station also serves as a charging station. Whenever the robot is docked in, it is charging. When the batteries run low in the middle of a task, it automatically goes back to the base station for charging. In addition, the energy dense batteries built in could power the robot for150-minutevacuuming or cleaning2100sqft house. So you’ll never have to be concerned about its batteries running low. 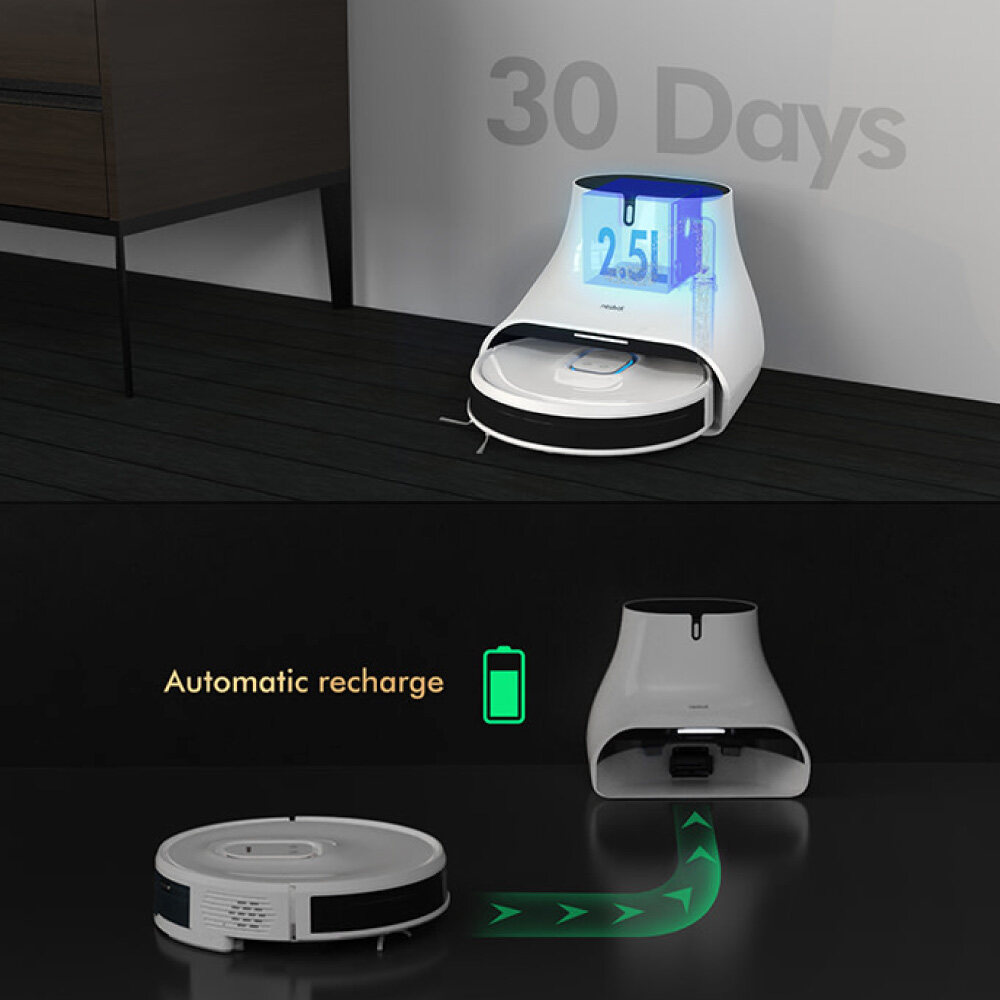 Smart Control through Neabot App
We've designed an app specifically for NeabotQ11, on which you can

monitor & control the robot, schedule cleanings, andset cleaning areas as well as virtual no-go zones even when you're away from home, saving you the trouble of placing physical obstacles to stop the robot for entering certain parts of your house. You can alsomanually control the robot on NeabotAPP, which displays in over20 languages andvoices. We want you to be able to operate the machine in your most familiar language.

You have a big house of multi-story? That's no problem for Neabot Q11, as our Neabot APP can store up to3 separate maps. No matter which floor it is on, Q11 will know which map to use and there's no need to do remapping. 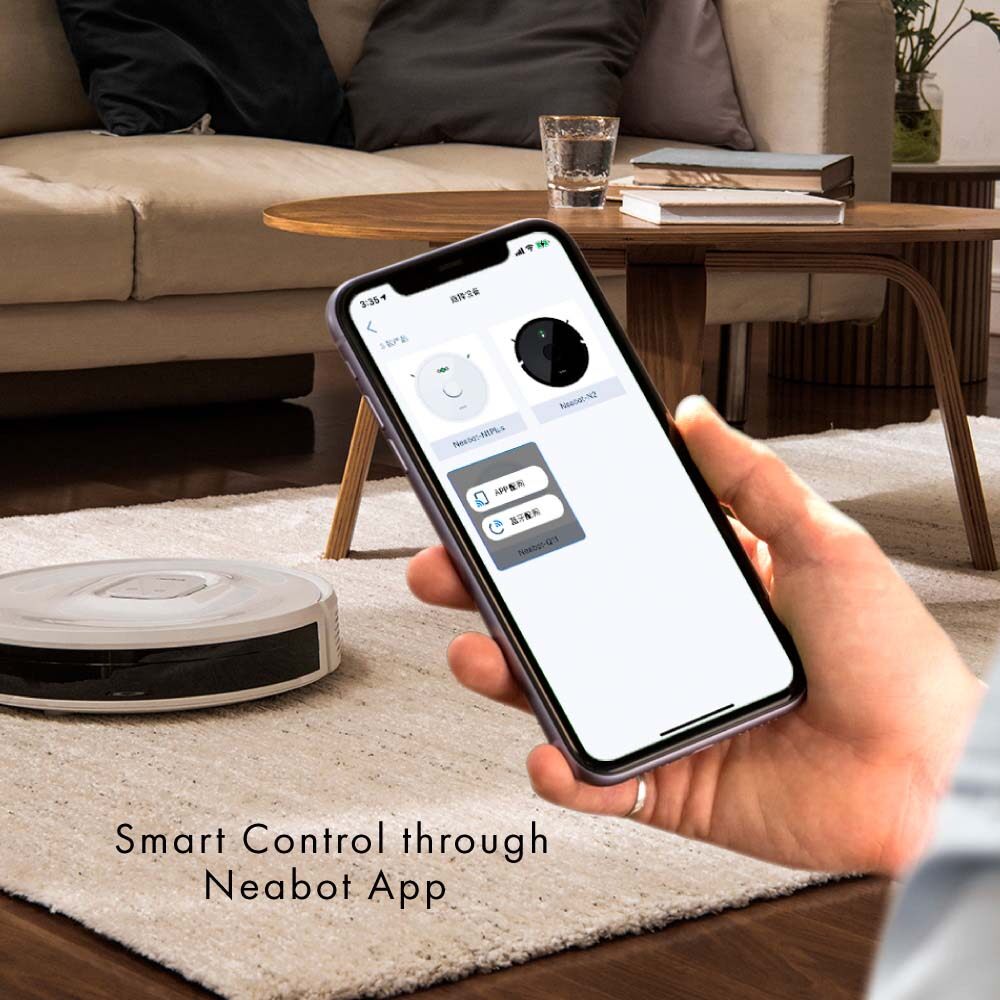 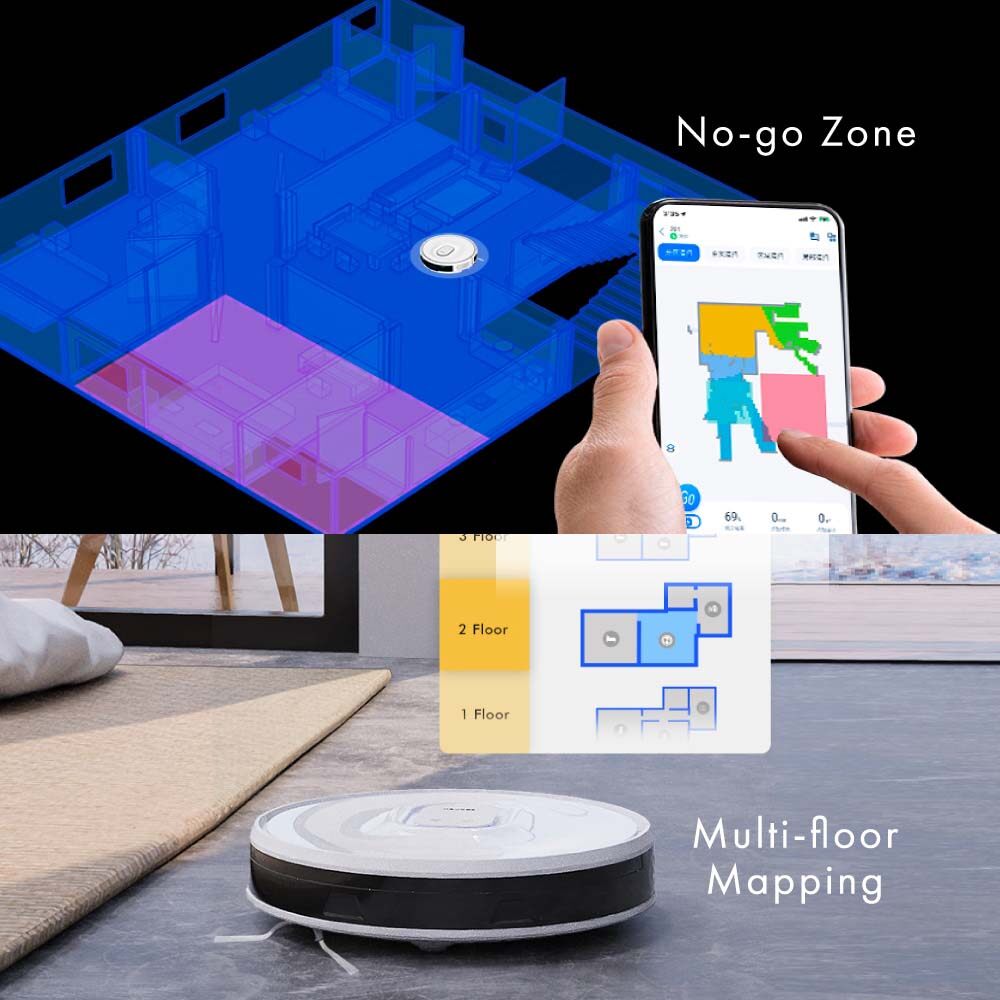 Very happy with this vacuum robot !!